(This is an archived copy of a post originally published at thesephist.com.)

Summer’s almost over! It’s a change of season, and the season of changes.

My internship at Repl.it is coming to a close, and I’m joining the fantastic team at Hack Club moving forward. I wanted to take a moment to talk about what I learned at Repl.it, and why I’m so excited about Hack Club.

Today was my last day as an engineering intern at Repl.it, a small startup behind one of the most popular tools for the world to build software online. If you haven’t used it, first, crawl out from the rock that you’ve been living under, and then go try it! It’s pretty cool, and not just because I built a small piece of it this summer. 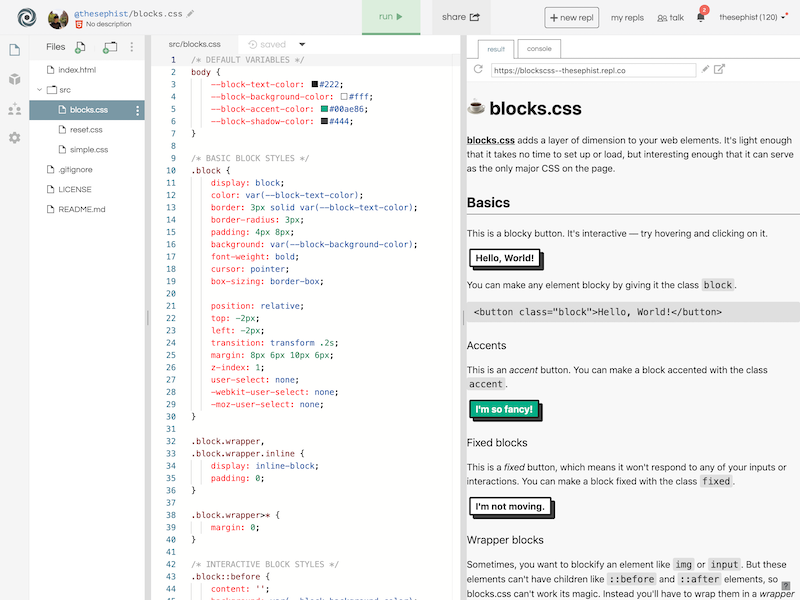 Repl.it is first and foremost an engineering-driven team building a tool for builders. Everyone, from designers to community managers to, of course, engineers, don’t just understand the technology we’re building, but use it day-to-day to get work done. Much of our non-critical infrastructure, like the blog, our newsletters, and pieces of our deployment pipeline, run on Repl.it itself, and we’re eagerly moving more and more of our core tools onto Repl.it. For the last three months, I was there as we talked about the nitty-gritty of programming language syntax, seminal computer science papers from the 1970’s and the pros and cons of text editor software architecture. Much of it came up as we were solving problems in our products, and some of it was just great lunch conversation.

But more than just the miscellanies of tech and software, people at Repl.it care about the future, and how the tools we’re building today are going to influence how entrepreneurs and developers – especially the next generation – design our future. This is what drew me to Repl.it and why I still think the vision for Repl.it is greater than some of the other online programming tools we use. Instead of simply designing a great online IDE, we often talked about our task ahead as building the right primitives for better ways to write software and build new things online. Primitives for how the next generation can shape the future.

There’s a common thread in Repl.it and many of the projects that I work on on the side. I like to think of Repl.it’s tools and the languages, and libraries I build as pieces of the infrastructure on top of which more people can build more interesting things than even the Repl.it team or I can dream up.

Repl.it is a team of about a dozen people, building something that, as of this month, two million people use to learn to program and experiment with ideas. Building great infrastructure for creators is, I think, the biggest force multiplier that an individual or a small team can have to influence how the future is built. And at Repl.it, I witnessed that power in action. 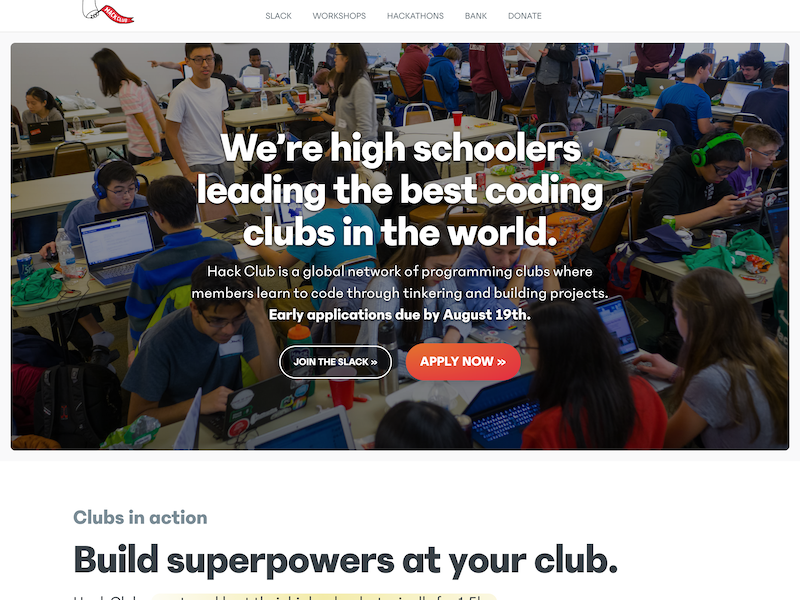 For worse or for better, not every problem in the world can be fixed by writing better software. At some point, ambitious people hit a point where, to realize their ideas, they need to start building things in the real world, and combine their ability to craft things in the cyberspace with their skills to make things happen in the meatspace.

Bits and atoms. Atoms and bits.

I really like this metaphor. It groups the key things that students need to realize ambitious ideas about the future into two sides of the same coin: how to organize bits into useful software, and how to organize atoms – and people – into meaningful change.

I’ve been a part of the Hack Club community for a few years, and there’s one thing that stands out to me about the Hack Club team and philosophy. Hack Club isn’t just about teaching students how to code, although we’re darn good at it, and getting better by the semester. Hack Club is really about being a place where students can dream big and feel comfortable being ambitious, and take that ambition to task at pushing out into the world their ideas about how the future should work. The code, the software, is just the vehicle for that change. It’s a powerful one, but it’s not the whole thing.

On the other side of that coin is the atoms, the real world. If students want to be a part of how we tackle big problems as a society, they need be able to build things in bits and in atoms, and for me, Hack Club Bank is the start of something special here.

Hack Club Bank is a tool for anyone – but especially students – to organize atoms and people into ideas the same way Repl.it is a tool for anyone, and especially students, to organize bits into ideas. Everything we make easier and cheaper to do at Hack Club Bank – fiscal sponsorship, managing money, organizing teams – these are the primitives that people can use to build out ideas in the meatspace. Everything that Repl.it and Hack Club’s other side provides are primitives for people to build out ideas in the cyberspace. These are two sides of the same coin.

I spent the last three years at The Anvil, Cal Hacks, and Dorm Room Fund watching students as they tried to grow products into companies and nonprofits, force multipliers that they could use to amplify their ideas of how the world should work, and make it real. And let me tell you, there are moments when I think, there’s nothing more inspiring and motivating.

But there’s so much more work to be done. There’s too many high schoolers and college students with ambitious, worthwhile ideas about how our communities can work better for everyone, and not enough people and few resources to help them get there. Bank is tackling this problem head-on, starting with one of the most inventive and smart communities of students I know – the hacker community at Hack Club.

This is why I’m beyond thrilled to join the Hack Club team this fall, and begin working on Hack Club Bank. So if you see a little fewer side projects coming from me this fall, you know why.

There’s an idea in programming called composition. To compose in software is to build small procedures and interfaces that do specific things really well, and then connect and assemble them into larger, more powerful systems. The small abstractions don’t need to know about all of the ways that it could be used. The abstractions worry about doing specific things well, and being useful tools for the programmer to draw on to tackle specific challenges. It’s a powerful idea, and it came up a few times in my time at Repl.it, too.

But this idea isn’t just limited to building software. If you want to build something meaningful, something complex, you can’t do everything from scratch. You need the right tools. These tools don’t need to understand the problems you’re trying to solve, but they do need to understand the problems they solve, and solve those problems well. These are the primitives, the infrastructure, for makers in the next generation, and if we have the right infrastructure, if we can get these primitives right today, there’s a whole generation of students with new ideas about how we can make the world work better for everyone, ready to take advantage of these tools and build something great.

Repl.it is doing exactly that, and so is Hack Club. Building infrastructure for the next generation of makers. I don’t know if I’ll be working at either of these companies in twenty years or in fifty, but I think I can say with a reasonable degree of certainty, I’ll still be telling you the same thing.

I’m building infrastructure for the makers, so they can compose a better future, one that works better not just for them, but for everyone.

← Visualizing and exploring sorting algorithms in two dimensions with Ink

Things I'm learning about in sales →